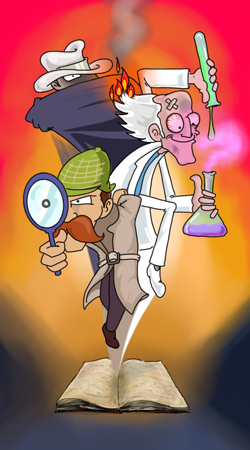 A mystery corpse, splattered in blood and surrounded by a cloud of flies. The stench of murder is in the air but who is the culprit? Join Inspector Bunsen as he tries to discover who did it, how it was done and why? The Whispering Corpse is a live action murder mystery, turning students into detectives. A 45 min live-action comedy drama sets the scene, introducing potential suspects, their motives and a plethora of clues, but can you uncover the truth? Students apply the knowledge from the Junior Cert course, conduct the experiments and test the theories to unravel the clues and solve the case.

The Whispering Corpse is a science-based murder mystery. This consists of a show and follow-up work pack for the classroom. Part one is a dramatic portrayal of a murder. The show(45-60mins) will visit the school and will be watched by all participating students. Suspects, motives and methods are introduced, investigated but without definitive answers. Part 2, a six class module (to be continued in class over the following fortnight) during which the students themselves apply the science from the junior cert course to solve the murder. The show is fast-paced, comedic and will contextualise many of the topics on the course. The class module is a teaching resource pack with detailed instructions on the specific experiments to be carried out(all from the JC course) and puzzles/clues which require students to engage with the course in order to find the killer.
Students work in groups to examine the facts of the case, examining witness statements, pathology reports and the evidence collected. By solving the puzzles and using the scientific clues, students solve the crime. Essentially, it is half Agatha Christie, half CSI, with the students becoming the detectives.The solution will be then provided in the form of a Video clip. The class module it covers many of the topics on the course in detail, including;

This show is currently in development and will be touring in 2013. We would love to speak to any teachers who are interested. Contact us at highrock2011@gmail.com